Sponsored Links:
Thanksgiving is not only a memorial time of God's blessing but also time to relax and entertainment for kids. These are some jokes for kids to honor: 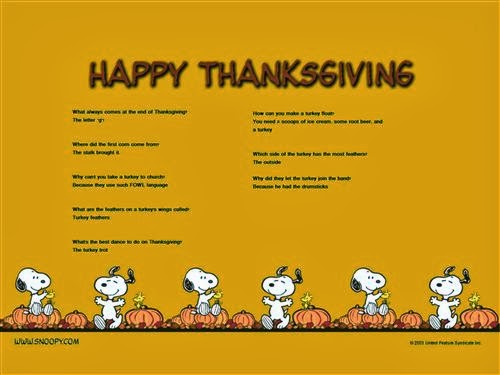 Jokes is one of the ways to relax in a moment for everybody on Thanksgiving day. 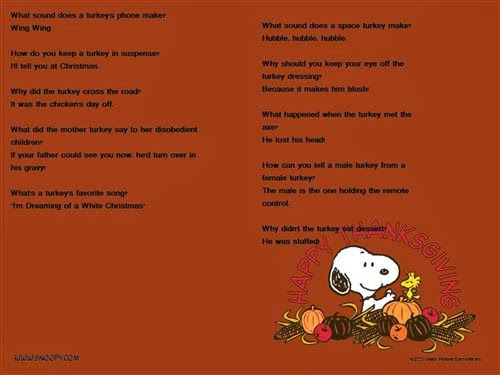 What always comes at the end of Thanksgiving? The letter "G"! Where did the first corn come from? The stalk brought it. Why can't you take a turkey to church? Because they use such fowl language what are the feathers on a turkey's wings called? Turkey feathers what''s the best dance to do on Thanksgiving? The turkey trot how can you make a turkey float? You need 2 scoops of ice cream, some root beer, and a turkey which side of the turkey has the most feathers? The outside why did they let the turkey join the band? Because he had the drumsticks 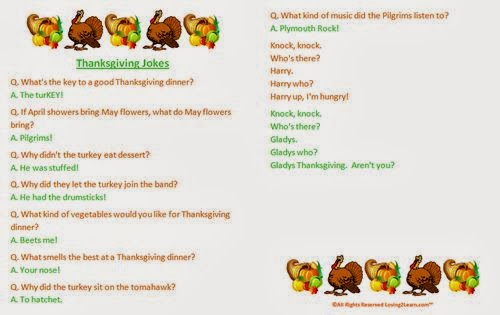 What sound does a turkey's phone make? Wing wing how do you keep a turkey in suspense? I'll tell you at christmas. Why did the turkey cross the road? It was the chicken's day off. What did the mother turkey say to her disobedient children? If your father could see you now, he'd turn over in his gravy! What's a turkey's favorite song? "I'm dreaming of a white christmas" what sound does a space turkey make? Hubble, hubble, hubble. Why should you keep your eye off the turkey dressing? Because it makes him blush! What happened when the turkey met the axe? He lost his head! How can you tell a male turkey from a female turkey? The male is the one holding the remote control. Why didn''t the turkey eat dessert? He was stuffed!